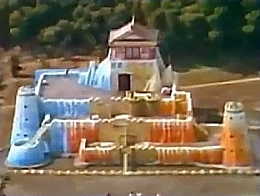 Takeshi's Castle
Takeshi plays the unscrupulous lord of a castle, the grounds of which he fills with ridiculous games in order to stop any would-be attackers in their tracks. However; this doesn't prevent the ever-ambitious General Tani from attempting to storm the stronghold. Wanting to overthrow Takeshi, the General leads an army of willing warriors into battle with the seemingly insurmountable games, and malevolent guards, that stand in their way on the path to the castle. 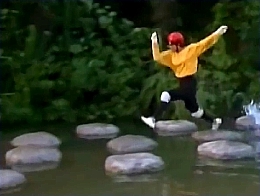 Skipping Stones
The challenges whittle down the army of volunteers until the last remaining few reach the final assault. In this Show Down, the attacking contestants have to break Takeshi's paper ring (or set-off his sensor) in order to win the battle.

If Tani's army is successful in doing this they have beaten Takeshi, stormed the castle, and are awarded one-million yen. A feat that very few people have ever achieved!

Takeshi's Castle has become a cult classic show worldwide; having been broadcast around the globe. More recently; the show has been revived in different countires, including Thailand - visit our Takeshi's Castle Thailand site to discover more - Indonesia, and Saudi Arabia. 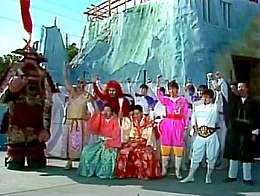 Takeshi and his Guards
Takeshi's Castle was produced and broadcast in Japan by Tokyo Broadcasting System. The series premiered on 2nd May 1986, and continued until 14th April 1989; with additional specials being produced until late 1990. Each of the hour-long episodes aired every Friday at 8pm, with occasional extended special episodes several times a year.

Each episode begins with General Tani and his army racing through the castle boundaries, as Takeshi's guards flee ahead of them. Headshots of each of the day's contestants are briefly shown on screen. We then join Count Takeshi at the castle, who is monitoring the invasion with his henchmen. In later episodes, instead of watching the approaching attackers, the Count and his advisor Higashi often find themselves in various comedic situations. We regularly go back to Takeshi throughout the episode to provide comedy interludes. 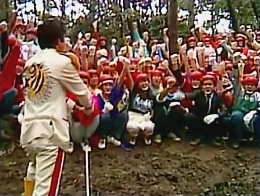 The General's army
Before the games begin, the General gives a pep-talk to his army in the woods at the edge of the castle grounds. He chats to a few of the contestants before leading the charge onto the first game.
Waiting at the first challenge is the Battlefield Reporter, who provides on-the-ground updates and gives us interviews with contestants as the proceedings progress. It's not unknown for the Reporter to get involved in the games, and lend a helping hand to those in need, now and again. 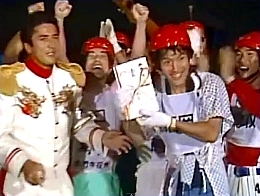 A winning team
The General's army has to battle through eight challenges before reaching the castle gates. Each of these games will eliminate those who are not successful in beating it. However, if contestants put in a valiant effort (or fail humorously!) they will also be allowed to continue onward toward the castle.

After passing the final barrier, those who have not been knocked out of the crusade by this point take on Takeshi one final battle. If the contestants lose, the General retreats to prepare for his next assault. If the contestants win - celebrations!! Takeshi begrudgingly awards the victors their prize.

Special episodes have a twist on the usual format. In special editions of regular episodes, the General gathers armies of contestants based on a certain criteria. Will youth, experience, or the power of love prove to be the crucial ingredient he needs to finally overthrow Takeshi?

• New Year / End of Year: The General travels to different areas of Japan to find contestants. In each region, the locals play three games. The best contestants then head to the castle to play as usual. (Eps 28, 73, 116)

• Teams: Contestants, including well-known personalities, come as a part of various teams and play through this extended episode. (Ep 41)

• Snow: Just like a regular episode, but set entirely in a Niigata ski resort. (Ep 86)

• Role Reversal: The General is now the owner of the castle. Takeshi has to try to win back his stronghold, either by playing the games himself, with the Emerald Guards, or by commanding a team of monsters to storm the castle for him! (Eps 17, 62)

• International Battle: Tani travels across the world to gather contestants from international remakes of Takeshi's Castle. Winning contestants from Holland's "Way of Life", Taiwan's "Ever Victorious", and the USA's "King of the Mountain" are flown to Japan to join qualifying Japanese contestants and take part in games back at the Castle. (Ep 106)

• Obstacle Course: The General visits different prefectures and pits local contestants against Takeshi-style obstacle courses. The winners from each area all travel to the castle and take on more extraordinary courses, in an attempt to reach the Ultimate Showdown. (Ep 131)

• 1000 Contestant Attack: The biggest ever army - 1000 contestants - play through games on a Yokohama beach. The winners travel to the castle to play as usual, except this time they're playing for prizes in the final - and not taking part in a Show Down. (Ep 133)

Takeshi's Castle was brought to the UK by Challenge TV. Each of the original episodes was edited down to 30 minutes for the English audience, keeping only the games, and was voiced-over by comedian Craig Charles. The first episode of this UK reversioning was broadcast on Challenge TV on the 9th November 2002.

International Special
The series proved a surprise hit. This lead Challenge to commission three more series' in 2003, ending with 10 special hour-long episodes. In these episodes some of the non-game footage was left in; mainly at the start of the show, creating a storyline.
The final new episode, the "A-Z", aired on New Year's Day 2004. Three (four for series one) 'Best Of' compilations were also produced at the end of each series, featuring highlights from that run.

Several mistakes were made in the reversioning - especially during the first series - which include winners in the final Show Down being ignored and announced as another loss instead. Craig also states that exactly 100 contestants begin each episode, with a fixed number moving on from the first game, etc. Lots of games were also cut out to make the episodes fit the half-hour time slot. On a few occasions games cut from one episode were stuck into another to pad out the show. A couple of episodes are made up entirely of previously-cut games.
Other errors include referring to characters by the wrong name - most notably General "Lee".

Avalanche
Craig established may catchphrases throughout the series, which become synonymous with the show ("What a wazzock", "Happy Clappy Jappy Chappies", "As my old dad used to say..." ) as well as coining the term 'Keshi-heads' as a name for fans of the show.

Takeshi's Castle became one of Challenge's most popular and best-loved shows, and so was repeated daily for years. Runs of the series have also aired on Trouble and Ftn/Virgin 1.

In 2009 the series underwent a slight makeover. The graphics in the titles were changed, and some colour and brightness issues in series one were fixed. This "new look" launched on the 7th September.

Victory!
Over the weekend of the 2nd-3rd June 2012 Challenge aired a Takeshi's Castle marathon, with back-to-back episodes broadcast from 11am to 6pm across the two days. On the second day the stunt was proving so popular that "Takeshi's Castle" became a Worldwide Trend on Twitter - ranked above terms related to the Queen's Diamond Jubilee celebrations, which were also being broadcast on the same day. Several Japanese news outlets picked up on this and ran stories about the "sudden phenomenon" on their websites.

On the 2nd August 2012, Sky Active (Sky Digital's Interactive service) launched an exclusive Takeshi's Castle game. The aim being to hop between Skipping Stones picking up stars, darumas and other bonus items, to earn points while avoiding capture by the Boxing Monster.

In 2010, here at Keshi Heads, we launched a campaign with the aim to get Challenge to produce a brand new series of Takeshi's Castle, using previously unseen footage. It was a success! On the 13th December 2012 Challenge officially announced that the new episodes would air in early 2013.

Tani is unimpressed
Challenge originally asked Craig Charles if he would like to return for this new series, and Craig said yes. However sadly, and bafflingly, Challenge changed their minds. Instead they brought in children's TV presenters Richard McCourt and Dominic Wood to provide the voice-over. As a surprise, Hayato Tani returned to his role as The General to film some exclusive footage for the new episodes.
The new series, named "Takeshi's Castle Rebooted", premiered on the 8th March 2013 with brand new titles, graphics and music. The first episode, a new A-Z, was hosted on-screen by General Tani.

Revenge of the Guards
The "Rebooted" series disappointed fans. Challenge received more negative comments about Takeshi's Castle Rebooted, on their social media accounts, than any other show in the channel's history - most complaints regarding Craig being replaced. The series never once hit the top ten rated shows of the week and, due to Challenge deciding to change almost everything that made their original version so popular, Takeshi's Castle Rebooted was a massive flop.

The classic Craig-voiced episodes returned to Challenge after Rebooted ended its run. In stark contrast to the newly produced series, these old episodes entered the weekly top ten rating shows almost instantly upon their return!

There are three different monetary prizes up for grabs in each episode:


Other prizes were occasionally awarded in special episodes:

So, did anyone ever win!? We've compiled a collection of questions that we are frequently asked, and have answered them all below. If you have a question that isn't answered here you can contact us via Twitter or post on our forum.

The content of this website was created and complied by Keshi Heads  (2004 - ).  Please do not reupload or republish any text, images or videos without giving credit - thank you!
Contact Us:   Twitter   ¦   Keshi Heads Forum